BGG is the token issued by Bgogo platform which is the proof of stake for the trading infrastructure. The upper limit amount of BGG is 10 billion without additional public offering. BGG will reward active users with trade mining. Also, under the exclusive “self-governance” mode, each supernode has the full discretion to list one cryptocurrency.

Mineable BGG tokens (50% of total supply) will be reserved for users in the form of high-frequency trading fee rebates, commonly known as mining through trading. A user's probability to earn DOUBLE BGG trading fee rebates will depend on their BGG HODL Points (BGG HP). Earnings will be available in the user's balance within 30 minutes. DOUBLE Trading Rewards are calculated according to the market price of BGG during a specific transaction. Rebates will be finalized and shall appear in the user's balance within 30 minutes.

BGG HODL Points (BGG HP) is a score based on weighted BGG holdings that appreciate 1% each day to emphasize the value of the BGG holding period. The longer the user holds BGG, the higher their BGG HP.

A user’s probability of earning the 2X reward will depend on their BGG HODL Points.

Every 24 hours, Bgogo will use 100% of the trading commision accumulated to repurchase BGG. The buyback tokens will be sent to a burn address made public. 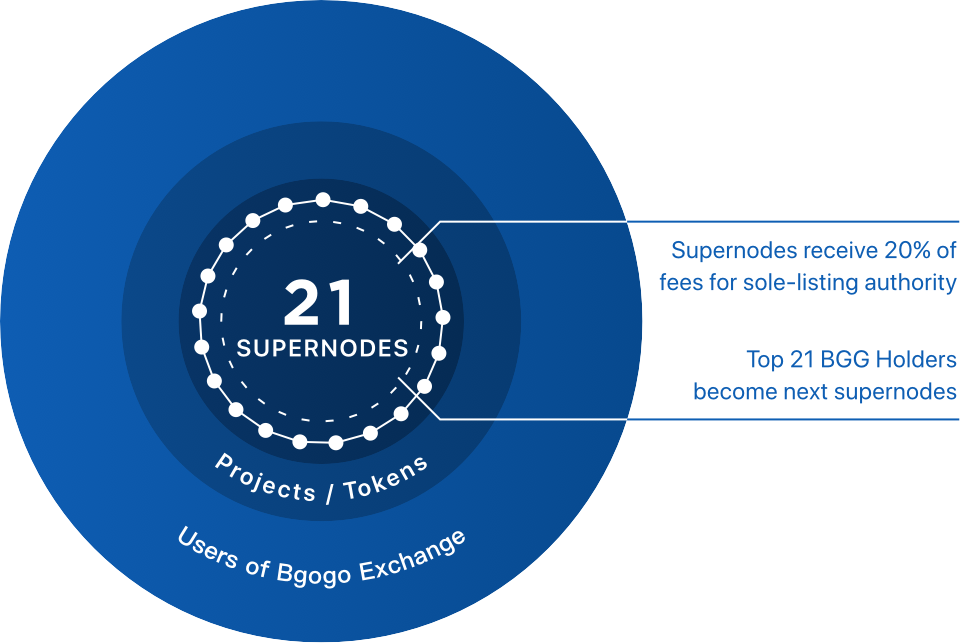 BGG token is privately funded by 21 top-tier blockchain organizations around the world. They will take up to the post of the first supernodes.

The rights of supernodes

1. The tenure of each supernode is one quarter. Within the period, each supernode is entitled to “one vote to list”, in other words, the full discretion to list one candidate in a global context. Supernodes must lock the positions of BGG within the tenure (90 days).

2. “Commissions”. 20% of the transaction fees generated by the successful candidate will return to the supernode during the candidate’s listing period.

How to become a supernode?

After the end of each quarter, new supernodes will be generated according to BGG’s position ranking. Bgogo team will conduct strict KYC qualification review on the candidates.